Jose Negron had been trying for 6 years to get the bariatric surgery done (gastric by-pass, the sleeve & as last resource the lap-band, even thought of paying it himself in Mexico or somewhere in south America) but kept getting turned down for X, Y or Z reason by the insurance company. 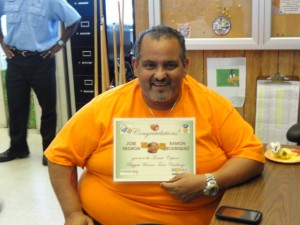 Then came a wake up call, even though he has been heavy set all of his life, he is a “healthy individual” (sugar levels, cholesterol, hypertension, diabetes all in check), a small clot on some veins on the inside of the right leg by the ankle got infected & he was placed on antibiotics, the Dr ran some tests & determined that it was weight related – she told him “I have been telling you for 6 years that you need to drop the weight ASAP because once you get one of the aforementioned diseases it would be a snow ball effect & the healthy “house of cards you are living in” eventually will fold in half”.

Small changes in eating habits came into play, then the contest came into the picture & now he had reached a significant goal: 32 pounds healthily weight lost in 12 weeks; small changes turned into major changes, the eating and additional activity habits showed well-deserved results! And, he was pretty sure he was going to win the Fitness Challenge at the Broward County Transportation Center where he has been a bus operator for 7.5 years. He came up with some impressive strategic actions that contributed to his success and he shares them with us: Cut the cable!

Jose stopped watching television which translates to more activity and less snacking. This new-found free time translated to starting an exercise program with walking, talking, playing Dominoes, spending quality time & doing other things to get out of the house. 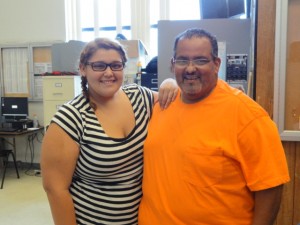 Its easier to control what you eat if you plan ahead, instead of waiting until you’re hungry, pressed for time, without healthy choices or any other of the endless reasons we rationalize our less-than-optimal eating choices. Jose did not carry extra cash or credit cards to work, limiting the possibility of weak moments, bad food choices and succumbing to temptations, in his lunch bag is everything he is to eat while at work, salad, fruits, vegetables & nuts, when all is gone he has eaten enough.

When Jose was really craving something sweet, like ice cream, he would have one bite. The first bite is the best anyway; if you’re strong enough to put the craved-food away after the first bite, this could be a good technique for you, also one day a week is “off healthy food day” (doesn’t mean you will go haywire & eat everything in sight, just have something different than the norm) use a small salad plate instead of the regular dinner plate, eating slower & enjoying more the little reward you are giving yourself will go a long way.

This is effective for many people, especially those that wake up early. Digestion is a lengthy process; sleep is when the body does repair and maintenance; with a large nighttime food deposit, all crucial energy. enzymes, etc. are diverted to the always-prioritized digestion process, if you suffer from acid reflux, you will find that this is beneficial. 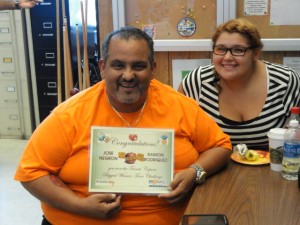 Jose was fortunate; his daughter Alex is in an EMT program & is shapping up for this (she has lost 65 pounds in one year) pushing him to join her at the gym. Also his girlfriend Liza of 3 months was his other inspiration! She lost 40+ pounds in 4 months just by changing her eating habits. Small steps leading to giant leaps. All 3 share a goal, to live happy & healthy lifestyles, and none were against the cable-cutting. If you’re with a partner and they don’t have your back, question their motives and don’t let them deter you. Most loving partners are supportive but some are threatened by change. Jose is not finished yet as his next goal is to win the next fitness challenge by setting the bar high & lose 50 pounds (or as close to it as possible) by new years eve.

Want to join the discussion?
Feel free to contribute!